What is Deep Soil Mixing?

Deep Soil Mixing (DSM) is a versatile ground improvement technique that takes place in-situ which can be used to improve the engineering properties of marginal and brownfield sites which comprise of soils, including peat, which are considered to be soft or very soft to depths of up to 25 metres.

GDL are the UK’s largest provider of Deep Soil Mixing and we have unrivalled production and support.

The technology is commonly used in Scandinavia, Japan and New Zealand as a foundation solution for roads, railways and buildings. More specifically, in areas of the world which can be affected by earthquakes, deep soil mixing can be used to help prevent soil liquidation.

Ground improvement technologies are also used extensively across the UK within the civil engineering and building industries to engender higher strength, lower compressibility or improvement of other engineering properties into native soils for the purposes of accommodating greater load.

Wet mixing involves the introduction of a fluid grout with simultaneous disaggregation of the soil with a rotating mixing tool. Dry soil mixing is used for very wet and/or organic materials, which have a moisture content high enough that when dry cement binder is applied under pressure and agitated by the mixing tool creates a fully fluidised soil / cement mixture.

In extensive and deep deposits of soft ground, deep soil mixing technology, which traditionally encompasses the mechanical agitation of the ground with the addition of a cementitious binder, is commonplace as a ground improvement method.

The chemical processes of binder introduction, for example the hydration and the subsequent production of primary and secondary cementitious by-products, ion exchange and flocculation, pozzolanic reaction and carbonation, are well understood with well-defined relationships between the volume of binder introduced and the strength and/or stiffness increase for a given binder type or blend. However, the mechanics of the mixing processes are not well understood but this is where our expertise and understanding in this area is vast.

We have adapted the techniques and the equipment that is required to better suit the range of soil conditions that we more commonly encounter in the UK.

What Is The Deep Soil Mixing Process

Our processes involve mechanically mixing a wet cementitious grout with the soils to produce either soil-cement columns or a mass block of improved material. The result is a massive increase in compressive and shear strength within the improved materials. In the case of soil-mixed columns, we can design and provide a composite ground improvement solution which offers enhanced stiffness characteristics, allowing the DSM columns and the surrounding soils to share the imposed loadings and settle uniformly. This high-pressure wet soil mixing system has a wider range of working parameters when compared with dry soil mixing.

What Are The Benefits Of Deep Soil Mixing?

What Are The Benefits Of Deep Soil Mixing?

Read more about our techniques below... 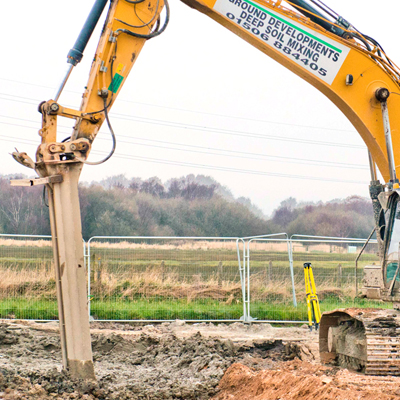